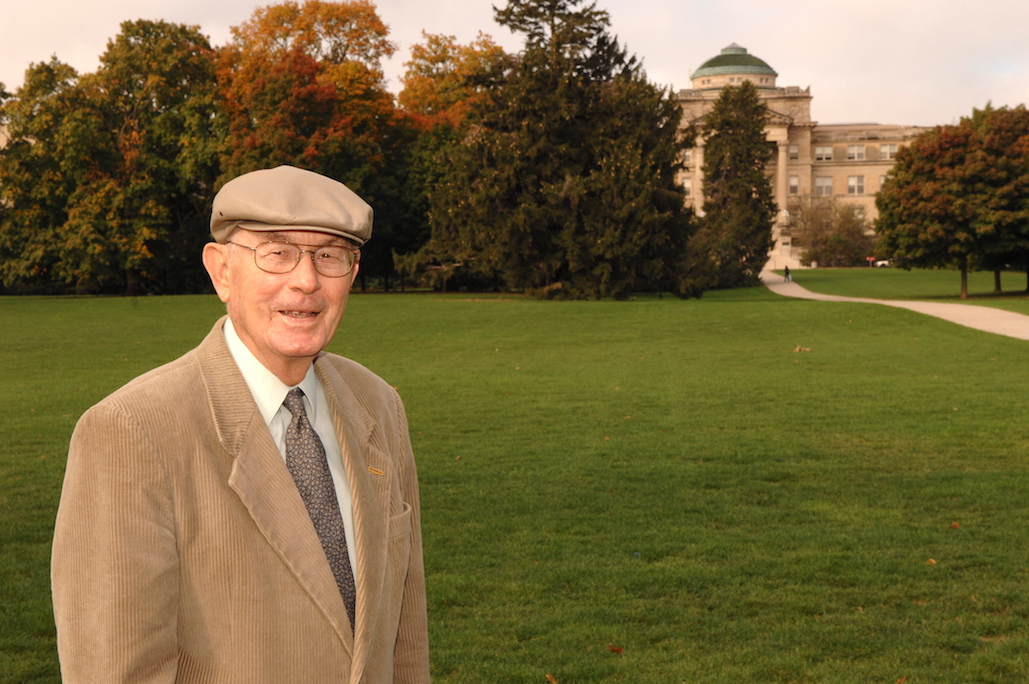 Looking back on a career spanning 50 years at an institution existing for 150, John Pesek has seen significant change on campus, in Iowa and the world – some of which he instigated.

Despite receiving countless awards for his service to agronomy, agriculture and human relations, Pesek has reservations about his reputation as one of the major influences on the university and the global scope of agriculture.

After he was named one of the 150 most influential Iowa Staters as part of a sesquicentennial tribute, he wrote a thank you note to the editor.

“I am very humbled and profoundly grateful,” he wrote. “I feel like a tiny intruder in a forest of giants… I had never considered myself to be worthy of this recognition.”

Regardless of Pesek’s opinion, his colleagues have long thought him among the greats.

“John Pesek is one the giants in agronomy and agriculture,” says Kendall Lamkey chair of the ISU agronomy department. “His influence here at Iowa State still persists as he is one of the top leaders and visionaries the field of agronomy has ever known.”

As ISU celebrates its sesquicentennial, Pesek reflects on how the university seems less personal today and has less general public support than 50 years ago. However, he says, “It pleases me that agronomy sustains a spirit of cooperation better to serve the public, to wit, the large number of extension, teaching and research initiatives led by agronomists.”

The university’s sesquicentennial celebration kicked off with a birthday celebration during Veishea last April and will continue through the day it was established, March 22, 2008. The College of Agriculture and Life Sciences and its departments have participated through displays, seminars, a fall alumni tailgate, collection of alumni memories and historical essays and more. Check out the college’s 150th website at: http://www.ag.iastate.edu/coa150.

Pesek is world renowned for his role in the 1989 National Academy of Sciences Report on Alternative Agriculture.

“The report paved the way for worldwide acceptance of ‘sustainable agriculture’ as the ultimate goal of all agriculture,” Pesek says.

His research and advocacy in the area, as well as the John Pesek Colloquium on Sustainable Agriculture hosted annually at ISU, has made Pesek’s name synonymous with sustainable agriculture.

“Sustainable agriculture is really a concept. In terms of practices, it is a moving target and depends upon a myriad of factors including, time, place, technology and need,” Pesek says. “We cannot consider ourselves sustainable until we know we and our civilization are still here as far into the future as the time elapsed since the emergence of agriculture (and civilization); at least 10,000 years, hence.”

He began his service at Iowa State in 1950 as an assistant professor in soils thanks to the unprompted recommendation of Louis Thompson, a former instructor at Texas A&M who became a colleague and friend at Iowa State. Pesek earned his Ph.D. from North Carolina State and his bachelor’s in agricultural education and master’s in agronomy at Texas A&M.

After moving through the ranks to professor, he was surprised by an offer in 1964 to serve as head of the agronomy department, but gratefully accepted the helm of what he considered a highly respected department.

“I spent 26 years as head dedicated to advancing first the faculty members and staff of the department, then its physical and financial resources,” Pesek says. “Our goal was to make student success possible in the curriculum and in post-college life.”

He has worked extensively internationally, emphasizing the environment, production agriculture and education.

Pesek credits his successes to “highly competent people around me most of my career including a first class department and college.”

He retired in 1992, but taught a course for international agronomy graduate students he developed until 2001. Pesek continues to participate in departmental activities and keeps regular office hours.

A career like John Pesek’s is tough to sum up, but he did provide the top ten highlights of his career (in no particular order).